The closing stages of the first round of the Rum Olympics brought together some disparate spirits, some were Usain Bolt, others were more Paula Radcliffe in Athens. 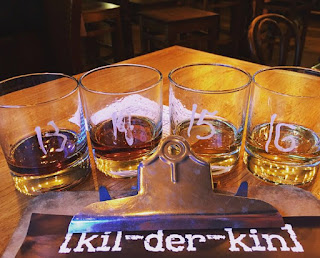 Aroma - Ooft, this one is a bit harsh on the nose, a weird mixture of windolene and petrol (2)

Aroma - Lots and lots of toffee with some coffee coming through and a sort of toffee popcorn feel to it. (6)

Taste - As expected from the nose this is sweet, but not overbearing with some alcohol burn that helps offset the sweetness (6)

Finish - Surprisingly clean for everything that's gone before, slips down fairly easily (6)

Enjoyed this one, sweet but not too sweet and very easy drinking.  I think this is Ron Millonario (Peru) (18)

Aroma - Bland, there really isn't anything coming off this at all, I could tell you it's alcohol and that's about it (1)

Taste - The problem with such a bland nose is that there's no warning of the taste.  This is bitter, harsh, like walking into a school changing room and being enveloped in a cloud of Lynx Africa (1)

This glass didn't need washed afterwards, it needed exorcised, this is competing with Stroh for the bottom spot so far, stuck for what this might be No idea (the depths of hell) (3)

Aroma - Some light butterscotch, not too much going on but pleasant enough (4)

Inoffensive, but equally not that exciting, this would be a good bottle to have on the table and drink away while doing something else.  I think it's Chairman's Reserve (St Lucia) (12) 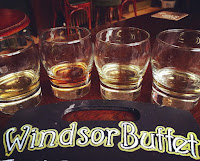 Seriously sweet, this is practically a liqueur to taste it so this is Pyrat (Anguilla) (12)

Taste - Punchy, a little think with a definite alcohol bite and a long vegetal note (5)

Definitely a challenging rum, but the Laphroaig drinker in me likes that sometimes. My suspect is Smith & Cross (Jamaica) (14)

Aroma - Not much if anything here, a little sweetness and alcohol that tells you it's a rum but not much else (4)

Taste - A bit of bite here, some woody notes which are quite pleasant but otherwise meh (4)

A boring white rum, can't be too harsh as white rums are made for mixing but this is meh. I'm making a guess at Brugal Blanco (Dominican Republic (11)

Aroma - Some vegetal notes and a big alcohol hit, a little sweetness (5)

Finish - Long, warm and woody with a bit of harshness (4)

Not sure about this one, it's a bit allover the shop but enjoyably so. The aroma makes me think it's an agricole but it doesn't taste as funky as you'd expect from an agricole. Arbitrarily I'll say Pere Labat (Guadeloupe) (13)